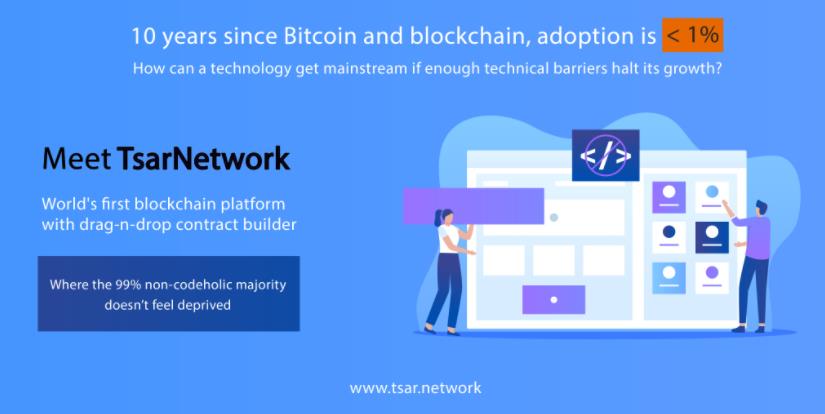 Why code smart contracts when you can design them?

London, Great Britain, 24.09.2021, ZEXPRWIRE, TsarNetwork proudly announced the latest release of its whitepaper to introduce the world to its all-new, breakthrough digital finance platform. With the aim of demystifying blockchain and cryptocurrencies, TsarNetwork was developed as an integrative, accessible, blockchain-based ecosystem for techies and non-techies alike. The platform is currently inviting everyone to invest in the future of custom smart contracts. According to the co-founder of TsarNetwork, Lucia Cermakova, blockchain technology has only reached a fraction of its true potential. This new digital financial network will focus on real-world applications of blockchain technology and make it accessible to all.

“The booming, trillion dollar blockchain industry promised too much but delivered too little. Only a handful of people have access to and an understanding of blockchain technology, “said CEO Natalie M. Webb as she spoke about the state of the current blockchain networks and platforms. The powerful of the blockchain world have forgotten the basic principle that trends end, things become obsolete and even technological wonders die if they don’t go mainstream, ”she added.

According to Webb, TsarNetwork aims to create a highly trustworthy and reputable blockchain network with a focus on the real world through targeted solutions designed for practical use cases.

Even a decade after Bitcoin’s introduction, less than one percent of the world is using blockchain technology. When the World Wide Web emerged in the 1990s, the Internet became a global phenomenon because its adoption was simplified to the masses. However, unnecessary complications and fog around the basics of blockchain technology have puzzled ordinary people about the concept of cryptocurrency. There is an urgent need for industry experts to understand this topic and make it easier for the public to use. Such a development could possibly repeat the Internet boom of the 1990s in the 21st century.

“Tsar Network is emerging as the future of custom smart contracts and being woven as the world’s first blockchain platform with a drag-and-drop contract builder,” said Webb while speaking on the network. “If most existing platforms are heavily developer-focused – we want to balance the scales by providing a platform that is both developer-friendly and easy to use,” she added.

Here it is important to break through technical barriers and unnecessary complications. To achieve this, TsarNetwork uses a zero-code approach that allows non-technical users to focus on the business, not the code.

The Tsar Ecosystem is an integrated network consisting of a front-end platform for end users, a blockchain that serves the underlying platform, and a utility token that enables a powerful economic model for the entire network. It is an ecosystem that enables its users to design their digital financial world as they wish. Its sophisticated, ergonomic front end is where normal users interact with the network most of the time. It is a comprehensive, all-encompassing suite of blockchain-based financial applications that are practical, affordable, easy to use, and secure.

TsarNetwork’s industry-focused interface will accelerate the rollout of TsarChain to a diverse pool of stakeholders. It enables contracting parties to define its scope, identify beneficiaries and transaction values, determine the type of assets related to the contract, and support their digitization. In addition, users can define the execution date and, if necessary, set some conditional logic related to the contract. The digital IDs in the chain (optionally linked to real identities) can be used to sign the contract before it is finally transferred to the blockchain.

“Tsar makes nerds happy too by providing them with a state-of-the-art blockchain, TsarChain, that is open to all kinds of development activities related to everyday and mission-critical smart contracts,” added Webb.

After the publication of its white paper, TsarNetwork is now launching its own ICO for TsarToken – the fuel that powers TsarChain. It will be available for trading and use as a transaction unit for services across the platform. In addition, Zar supports a generous economic model of 50% revenue share with its users.

Tsar wants to break away from the current trend of technically sophisticated interfaces and offer something that the non-technical public can interact with, similar to interfaces on the traditional web. The interface was developed with functions of popular internet applications in order to hide the blockchain infrastructure as much as possible from the end user. At a very high level, the front end presents blobs or modules that can be placed on a canvas in order to design a workflow. These modules form the contract logic, the general terms and conditions and call up the backend infrastructure behind the scenes.

“When developing Tsar’s user interface, we kept the user experience at the forefront of our design and development processes. This will be an ongoing process as simplicity and usability are cornerstones of our development philosophy, ”said Webb.

For more information and to become part of this emerging network, please visit the website at:

Disclaimer: MENAFN provides the information “as is” without any guarantee. We assume no responsibility or liability for the accuracy, content, images, videos, licenses, completeness, legality, or reliability of the information contained in this article. If you have any complaints or copyright issues related to this item, please contact the above provider.