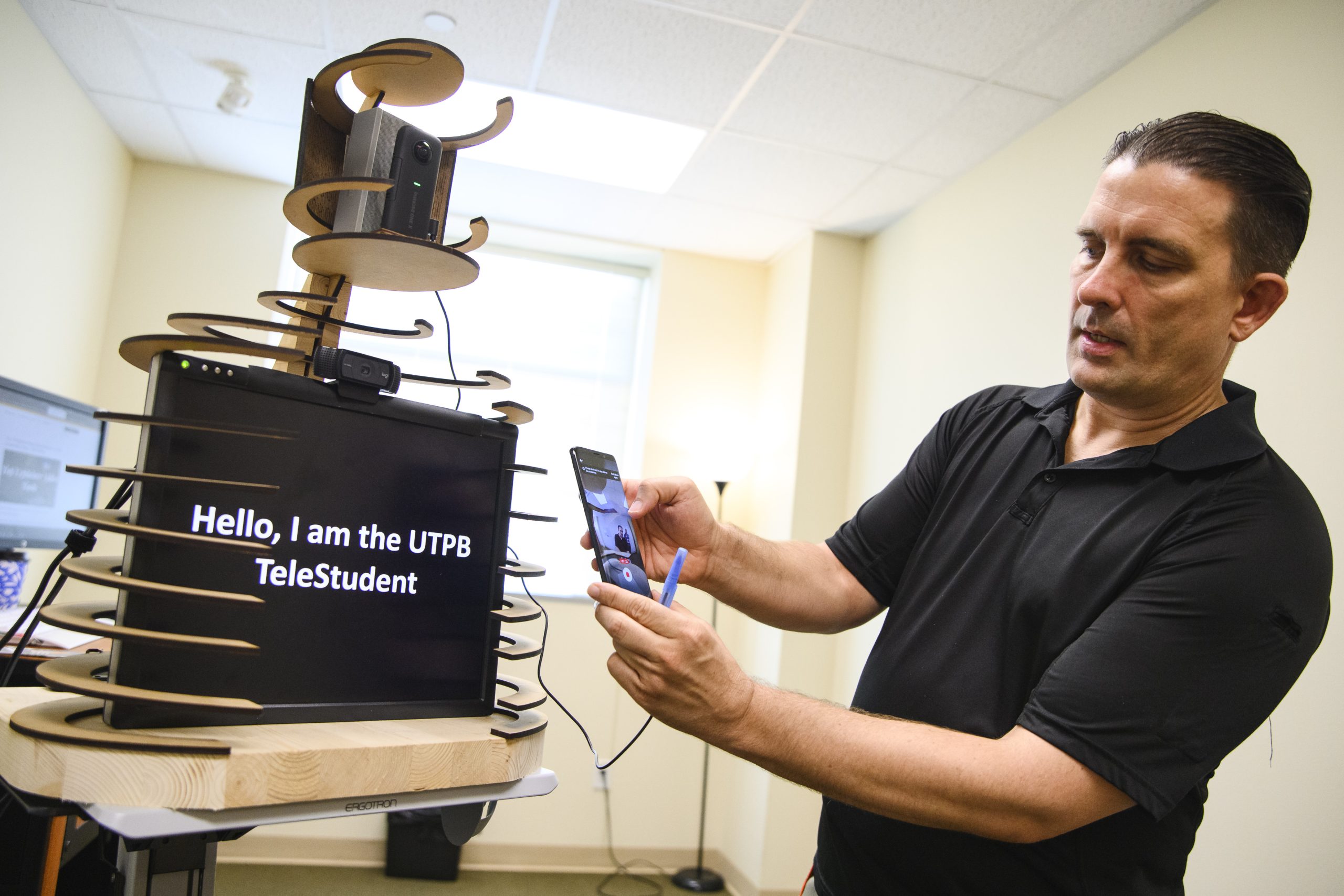 To help faculty create a more engaging virtual environment, two officials from the University of Texas Permian Basin created the IT TeleStudent.

TeleStudent is a skeletal robot that lives in the classroom and acts as a student.

Senior Instructional Technology Analyst Curtis Rogers said it can be placed in lecture or small group mode and gives students a fuller view of the classroom with its 360-degree camera. Many students can also connect at the same time.

“What they can do is they can actually look around, either on their computer or through the headset, … around the classroom and see their classmates. The reason there’s been a body is to make you feel like you have someone else in the class with you,” Rogers said.

Brad Shook, vice president of information technology, said they try to give faculty all the tools they need to make their classes interactive and interesting for students.

“When I’m in a class, we can actually lower it so people at home have the same perspective as if they were in the classroom,” Rogers said.

The screen will indicate if anyone has a question.

That way, he added, distant students wouldn’t have to be taught differently by teachers.

If a student has a question, the professor could answer it as if the student were in the classroom.

Shook said the idea came from Clark Moreland, a lecturer in English and director of the Heimermann Center for Engaged Teaching.

Shook said Moreland had a number of different ideas for how to engage remote students, so he reached out to the IT team and it went from there.

“How do you make students feel like they’re not just talking to a webcam on a computer? Then… how do you make the homeschoolers feel like part of the class by giving them the freedom to look around what they want to see, especially with the 360 ​​degree camera it’s a lot more like class because sometimes it is just interesting to see who you’re in class with, or if someone’s speaking, other than being stuck in front of a static camera and looking ahead,” Rogers said.

Rogers said there’s a privacy shield in place for students who don’t want to be seen on camera.

All of the technology used for the TeleStudent was already in use at UTPB.

“The key thing about the TeleStudent is that it brings everything together at once and that’s why we’re really excited about it because it includes so many different things that we’ve had good success with so far. ‘ Rogers said.

In this area, Shook said, there are many oilfield workers who want to go back to school, and often they can’t physically go to class, but that way they can still connect with the group and feel part of the group.

During the pandemic, he said, they used Microsoft Teams when delivering synchronous classes.

“…So when I’m not looking at the chat box it’s very easy to miss the question, that’s why we have this big screen, so now it’s always big when they type it. I can see Curtis had a question and I don’t have to… go back to Teams and check…” Shook said.

Using items already in place at UTPB and likely in many school districts, the TeleStudent was built in parts. If they had worked solidly, construction would have taken two weeks, Rogers said.

Shook said the other thing they do in his department is use free software.

Rogers said they use open broadcaster software, which many streamers and gamers use.

Rogers said the technology could be duplicated “quite conveniently”.

Once they progress through the fall semester and get feedback from students, Shook said they might change or refine the model.

They have also used the technology to help people with social anxiety, such as making videos of going to a bank and opening an account or making a deposit so they can become familiar with it.

The technology can be shared with other institutions and school districts.

Shook said another exciting aspect of the TeleStudent project is the involvement of student workers who helped build, assemble and test the frame.

“…That’s one of the things that our department really prides itself on, involving a lot of students (that we bring with us) (and letting them gain experience on these projects); Work experience to put on your resume.”

“One of the really nice things about Curtis’ department over here at ITS Productions is these collaborators, when they leave they have all kinds of production on their resume, from 360 video to 2D modeling,” Shook said .

“…By working with ECISD and their CTE (Career and Technical Education) program, the students are actually here for a few hours every day…so they get (the) high school credits they need, but then they gain experience here.” learn many of these skills. We have them in our production department, technology department and technical support. Next fall we will have them in our design department. We’re going to have them over in the arts building too, so we’re really trying to bridge that gap between our high schools and UTPB so our high school students can see what we have to offer and get some of that experience before they graduate high graduate school,” Shook said.

Rogers said they’ve done quite a bit with escape rooms, which are also used extensively.

A music faculty member, Dan Keast, had gone to a music conference and they showed a static image of some objects and you randomly clicked on them and that took you to the next phase.

It ultimately ended up in a live team session with the student playing his instrument for Keast.

Rogers said this created a lot of excitement among the faculty about 3D environments. They made a video showing how to get around campus in a wheelchair so you can see what it’s like and what the challenges are.

Shook said another piece they’re exploring is how to make the technology affordable for students.

“…I don’t know if we’ll ever see virtual classes all the time…but there will be situations where virtual is most useful and it just adds that extra level. We want to be able to find a cost-effective solution so that these students can now all participate in this 360-degree world and… get that experience and that commitment and hopefully get excited about what they’re doing because now they can they’re doing it in virtual reality,” Shook said.

Rogers said he’s done a lot “to play a lot of it, using technology that students already enjoy and getting them into it, so hopefully it improves their experience of engaging in the classroom.”

Shook said they had already done something similar with an exhibition of ancient Mexican art owned by Jason Osborne, ECISD’s chief innovation officer.

Rogers and his student collaborators made 3D scans of many artworks and 3D images and built a complete package that a school can download. It contains all the information about the pieces.

“You can experience it in VR. They can print the objects because there are 3D prints, so now they can have the full art gallery experience. You can touch it, you can feel it, you can see it in 3D, you can rotate it in 3D, zoom in. It’s all the technology that they have,” Shook said.

Huawei is working on solving the heat problem of 5G phones

Australia is a nation of “accidental investors”. Is it time to take a closer look at the pension system? | Satyajit Das