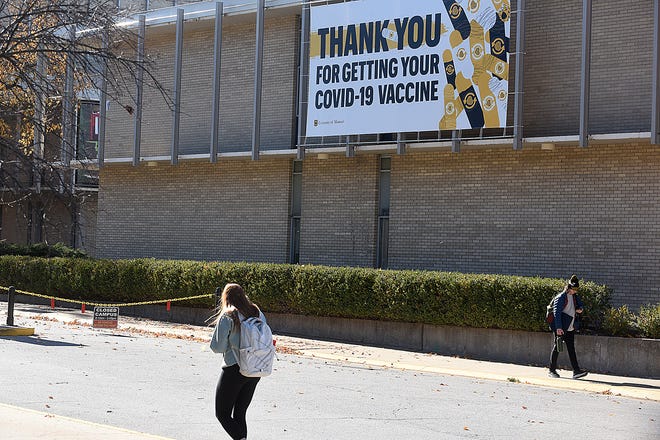 The Missouri curators approve the COVID vaccine mandate for most employees

NS. LOUIS – Most of the University of Missouri system employees need to be vaccinated against COVID-19, the Board of Trustees voted on Thursday.

They have until January 4th to get their last vaccination so they can be fully vaccinated by January 18th.

The vote was 7-1, with Jeffrey Layman voting “no” and Todd Graves abstaining.

“I think it’s a gross overstepping of the president’s authority,” said Graves of the US President Joe Biden’s order that sparked the action.

The board met at the University of Missouri-St. Ludwig.

The measure approved by the board allows medical and religious exceptions as well as exceptions for employees to whom the university can certify that they have no relation to federal contracts or research.

“We feel compelled to adhere to this in many ways,” said Mun Choi, President of UM System and Chancellor of MU.

The reason for the vaccine mandate is the implementing regulation that the mandate prescribes for federal contractors.

“We have hundreds of millions of dollars in federal research and contracts,” said Choi.

Currently 55% of the MU employees; 66% at the University of Missouri-Kansas City; 55% at UMSL; and 43% at Missouri University of Science & Technology are vaccinated.

For employees who apply for the exception of no contact with government contractors, the university can try to separate the workers from the contracts, Choi said. He doesn’t expect many employees to quit because of the decision, he said at a press conference.

“Maybe there are,” said Choi. “When I look at the university hospital, there were only four people who did not apply for a permit and did not want to be vaccinated. That’s four of over 7,000 employees. “

“We will do everything we can to ensure that we do not have to part with the employees,” he added.

Although the curators voted in September to ban vaccine mandates, noted curator Robin Wenneker that mandates are allowed in this situation.

“I congratulate the university,” said Wenneker. “This is such a complicated matter.”

The Faculty Council of the MU passed a resolution in October calling on the Board of Trustees to require vaccines for all students and staff.

Thursday’s measure only affects students who are also employed at the university.

Prices for student dormitories and restaurants are rising

In other areas, the board approved room and board prices, which will come into effect in the 2022 summer session. The predominant living and dining plan at the University of Missouri will be increased by 6% from $ 9,915 to $ 10,509 for the academic year.

Curator Greg Hoberock asked about service packages for employees in catering at the MU and found that the other three locations are contracting their catering services.

“Our service package is simply too extensive,” said Hoberock.

He said there was no consideration of a food service contract at MU.

“We have a lot of debts in our housing industry,” said Rapp.

If the university is only able to fund debt servicing, it will not enable modernized housing, which could affect student recruitment, Rapp said.

Despite the increase, the living and boarding rates at the MU remain the lowest among the four campuses, said MU spokesman Christian Basi during a break from the meeting.

Change of gun rules for employees

In other measures, the board approved changes to its collective rules and regulations to allow employees to keep their guns out of sight of the public in their locked, parked vehicles.

The measure was taken to comply with state laws and court rulings. the The Missouri Court of Appeals ruled against MU in February on a lawsuit filed by a professor.

The Missouri Supreme Court declined to open the case in September.

“We have been involved in this lawsuit for the past 4 1/2 years,” said Choi. “We are here to obey the laws of the country.”

While answering a board question, Choi said this would apply to student staff when they are on campus as staff.

Graves, a former federal prosecutor, asked why the issue had not been brought to the board beforehand. He asked MU General Counsel Steve Owens if it was customary to ignore court orders.

“I find that shocking,” said Graves upon learning that the injunction had not been enforced.

“No, it is not our normal practice to fail to comply with a court order,” Owens said.

Basi said after the meeting that a court order had not yet been issued on the case.

The board’s finance committee first discussed the rule change and voted to forward it to the full board without recommendation.

“Are we open to one more lawsuit” if the change is not approved? said curator Keith Holloway.

As part of the board motion, the board directed the finance committee to look into the weapons issue on campus for the next three weeks.

Always on the phone? Hide screen? Evidence that your partner is cheating

Greece fines people over 60 who remain unvaccinated after January 16, 2022 –…