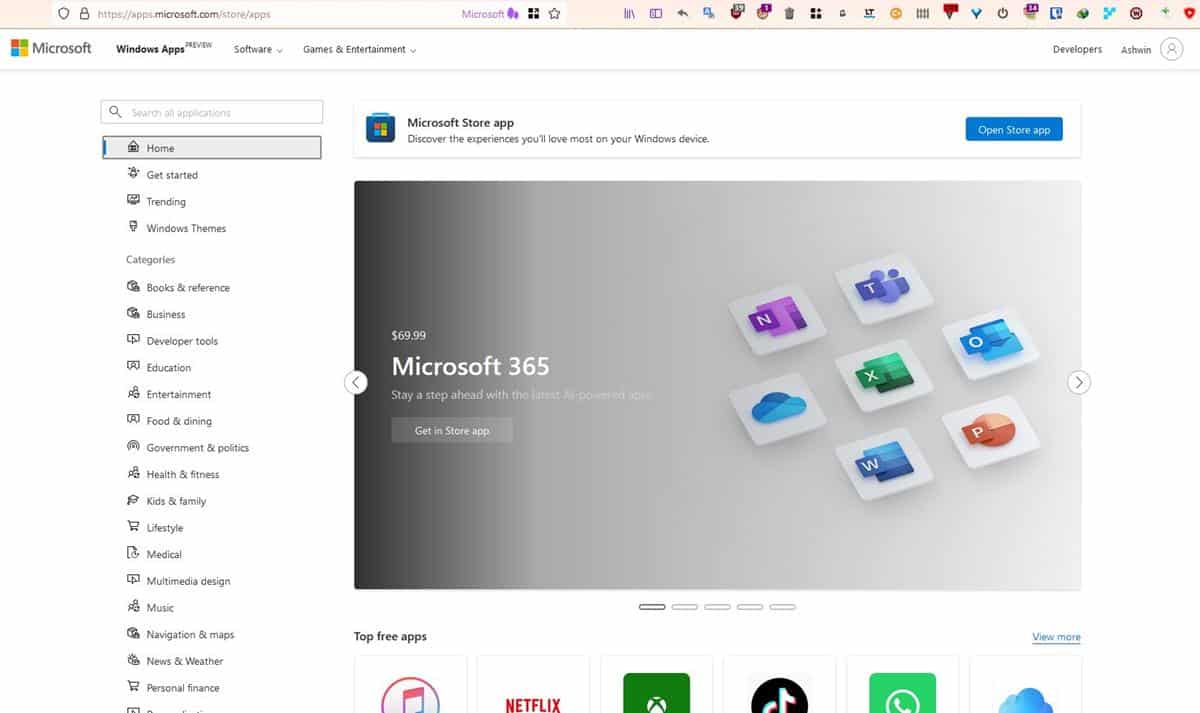 The Microsoft Store on the web gets a redesigned user interface

A new theme for the web version of the Microsoft Store is live. It has the preview tag at the top, indicating that this is still an experimental design.

Microsoft overhauled its Store app on PC when Windows 11 was released last year. It was a much needed change. I use the Store app a lot more on Windows 11 than I used to on Windows 10. The new design is pretty good, easier to navigate, and more powerful than its predecessor. It’s not perfect, there’s always room for improvement.

New design for the Microsoft Store on the web

The first thing seen was the redesigned web interface of the Microsoft Store FireCubeStudios. It’s similar to the design of the Store app on Windows 11. The sidebar on the left offers a better way to browse the different categories of apps.

The website can be accessed via this URL. It has the same card-like interface for apps, screenshots in app lists, descriptions, etc. There’s also a new user ratings section, and you can sort the comments by freshness or usefulness.

The Microsoft Store on the web isn’t particularly useful, it still directs you to its desktop program to download the apps you want. So it takes an extra click, but since the Store app’s interface isn’t particularly mouse-friendly, the web version proves to be better. The latter makes it easier to share links to apps, since there are no restrictions preventing us from using the browser’s right-click menu (except for the sidebar).

An article on Thurrot’s blog points out that the web version shows the date an app was updated. In contrast, the Microsoft Store app does not provide us with this data. Other useful information such as release notes, version numbers and the system requirements for apps are still missing. Another major flaw in the revamped web version is the game section of the store, which may be added in the future.

All of these improvements are nice and welcome. But let’s not forget the elephant in the room, the content available in the store. I’m not talking about the quality of the apps, I’m talking about the existence of the numerous fake apps available on the Microsoft Store. This isn’t the first time we’ve seen sneaky apps on the storefront. Does Microsoft even care about this problem?

Not only do these rogue apps infringe the license, copyright of the programs they impersonate, they could also be potentially dangerous, also known as malware. Some of these apps appear right on the first page of search results. Not only will this confuse the average user, but an unaware person may end up installing a fake app instead of the original one because they couldn’t tell the difference between the two. Why? Because the apps name and/or icon were similar.

Also, some of these fake apps are not free, you have to pay for these illegal programs. It’s really embarrassing that Microsoft has to responsibly curate its store, vetting every app before it’s allowed to release to protect its customer base.

The Microsoft Store on the web gets a redesigned user interface

The Microsoft Store on the web has been revamped with a new design similar to the desktop version on Windows 10 and 11.