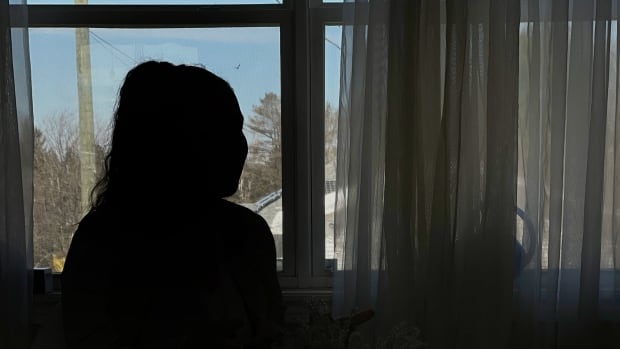 A Nova Scotia mother who left Halifax to get away from her abusive ex-partner says the province’s police and family court system abandoned her and her son for failing to take their safety concerns seriously.

Mary escaped the abusive relationship a decade ago and now wears an RCMP-issued panic button everywhere she goes, but for years the courts have asked her to share parental leave with someone she fears.

“I left my church, I started my life over again. I left town. I’ve done so many things to try to have a peaceful life and … it doesn’t matter how much peace I have, I never feel safe,” she said in an interview.

Advocates and survivors across Canada say intimate partner violence is not given enough consideration in child custody matters, and there are calls for more training for attorneys and judges about the risks survivors face long after they have escaped from abusive relationships.

CBC News has agreed not to use Mary’s real name.

Her ex-partner is facing two sexual assault charges over separate incidents with Mary in 2016. He pleaded not guilty to both charges last month and is due to appear in court in September.

The man is due to stand trial next year for allegedly making threats in connection with an incident last December involving Mary, her mother and her partner.

Linda Neilson, a research fellow at the Muriel McQueen Fergusson Center for Family Violence Research in New Brunswick, said courts sometimes assume that past abuse has no bearing on current custody cases.

But the research clearly shows that domestic violence is a cumulative pattern over time, Neilson said, and she believes more practical training is needed for judges.

“It’s not enough to provide legal education about domestic violence,” Neilson said. “You really have to be able to convey practical steps that judges should take in the cases, so that a judge doesn’t inadvertently endanger women and children, for example.”

Mary, who met her ex when she was 16 and he was 22, said the violence started early in their relationship.

When she was five months pregnant, Mary said her ex kicked her in the ribs and she ended up in the hospital.

She remembers picking up her young son one day and trying to walk.

“He said, ‘You’re not going to leave this house alive with this baby in your arms,'” she said. “So I stayed, and that’s the problem, so many women stay because they’re scared.”

On an August night in 2012, she called the police for the first time and walked away with her son, who was just a toddler.

A document from Child Protection Services notes that her ex was arrested that night and given a restraining order. The document details Mary’s injuries, including bruises on her wrists, fingerprints on her neck and a swollen eye.

Mary said her former partner was ordered to complete anger management, but those terms were eventually dropped.

After she left, the two shared custody of their son informally for a time before going to court. In 2018, a judge granted Mary primary custody and her ex was allowed to see the child for unsupervised visits about two days a week.

A 2019 CPS document notes that Mary’s son, now a teenager, told a social worker that his father used to hit him, but that the beatings have since stopped.

In a court-ordered report, titled Voice of the Child, which was completed in January, the teenager asks that he only spend time with his father when someone else is present, but also expresses hope that his will be better father will change.

The teenager also describes not always feeling safe with his father and speaks of being brought to Toronto years earlier and not being able to contact his mother.

In court documents, Mary describes how her ex broke her court order in 2019 and took her son to Toronto for five days.

She was told her son had been picked up from school by his father, but had no idea where they were.

“I literally fell apart,” she said. “I had to quit my job because of it. My hair fell out. I cried the whole time. I didn’t eat anything.”

One day the school called to say their son was back. Mary decided to homeschool him for a while afterwards.

Earlier this year, Mary said a judge read her new address aloud during a virtual court hearing after she asked the court to keep it confidential. She said she has since seen her ex’s car parked in front of her house.

“This person abused me for years and there are pictures and evidence that show this happened but they are still doing nothing to protect us,” she said.

Rollie Thompson, law professor emeritus at Dalhousie University, said recent changes to both the Divorce Act and the Parenthood and Support Act seek to give judges more clarity when it comes to intimate partner violence.

Before the changes, domestic violence was not directly dealt with by the Divorce Act, leaving gaps in the way courts handled these cases. Now the law defines domestic violence more clearly and directs the courts to give priority to a child’s physical, emotional and psychological well-being.

“So the starting point is the safety of the child. That in and of itself is a strong direction in terms of the meaning of domestic violence,” Thompson said.

However, one activist and author working with survivors is not optimistic that these law changes will make a meaningful difference.

“When survivors are offered these early intervention and support services, they can often walk faster, they can get support sooner, and we can build a protective network around the children,” she said.

Jennifer Stairs, communications director for the Nova Scotia Judiciary, said she could not comment on specific cases. In an emailed statement, she said all parties in family court are subject to a domestic violence review “at the earliest stage”.

She said the information gathered helps assess risk and informs how a file is managed.

Stairs also said individuals are encouraged to inform the court if violence, threats or other safety issues arise.

The police issue a panic button

Based on the Voice of the Child report, Mary said her ex is currently only allowed to see her son once a week for a supervised visit.

She now carries a small black case about the size of a pack of chewing gum with her everywhere she goes. It’s a panic button that the RCMP has instructed her to press whenever her ex-partner gets close. Cameras have also been set up in front of her house, facing the street.

Mary is grateful to have the device, but it hasn’t taken away her fears. Today she spends most of her time near her home.

If you are looking for help or are looking for information about abuse, you can call the 24-hour toll-free helpline at 1-855-225-0220. A list of resources in Nova Scotia can be found here.