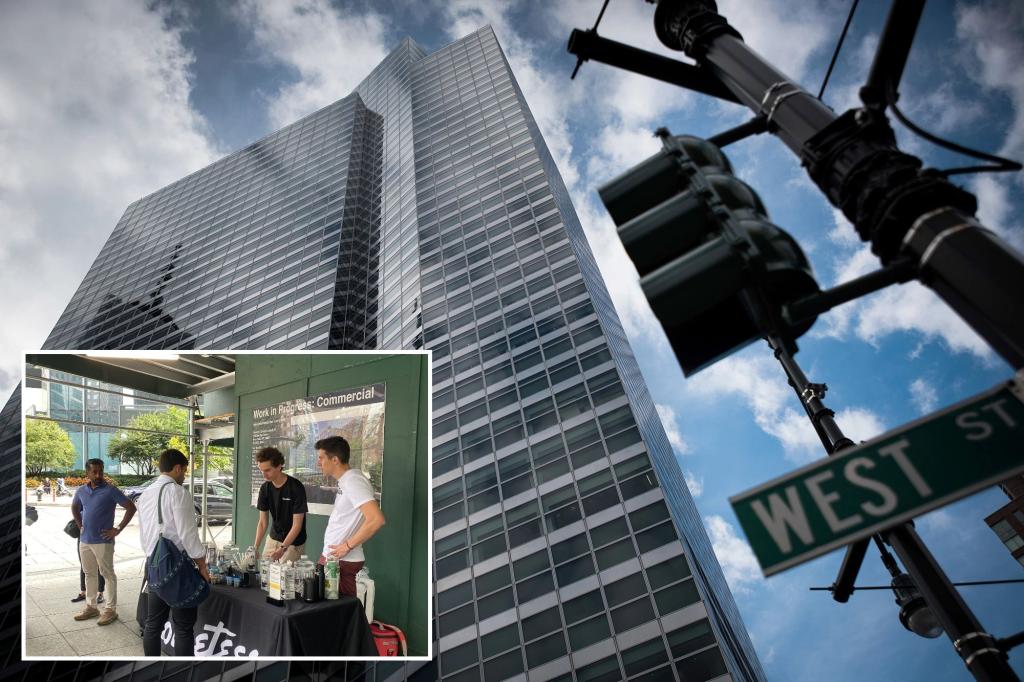 A coffee vigilante set up a shop Monday outside Goldman Sachs’ headquarters to give free coffee to besieged employees after the Post reported that the Wall Street banking giant had shut down its free “grab-and-go” coffee station to distribute, as the post learned.

Bleed-eyed bankers who stumbled into Goldman’s gleaming building at 200 West Street could refuel with free cups of joe from Cometeer, a Massachusetts-based company that makes cold-brew pods.

“All we have is a sad Keurig on my floor … there’s no more delicious cold brew,” said one analyst.

The Post reported Monday that Goldman CEO David Solomon scrapped the free coffee — as well as stocks of French custard, almond milk, soy milk and half and half — despite his decree requiring workers to return to their desks five days a week .

Some junior bankers were a little nervous while queuing for the free Java jerk.

“Analysts were afraid to cross the picket line — they were clearly nervous about taking the coffee,” said Britton O’Daly, who staffed the Cometeer coffee station. “We saw a lot of people looking at us and a lot of CEOs glaring at us.”

Staff were also worried about spending too much time waiting for their caffeine fix. O’Daly said he saw staff relax when they saw they could get coffee in 30 seconds instead of three minutes.

A young Goldman employee grabbed a mug just before the crosswalk turned red and said, “I’ve got to catch the light right now — I work at Goldman, you know.”

The mocha maker also got some heat from security for the publicity stunt. Guards told O’Daly he had to move his unlicensed coffee stand across the street. He moved quickly under a dingy scaffolding a block away.

O’Daly, listed on its website as Cometeer’s special projects manager, said he was inspired to “give coffee to Goldman analysts in need” because he loves the idea of ​​helping people get back to work and thought , they would appreciate the free brew .

Goldman employees weren’t the only ones excited about the free coffee, O’Daly added.

A Citibank employee ran over, excitedly grabbed a cup and shouted, “We never get free coffee at Citi,” O’Daly said.

Governor Lamont welcomes the federal report, which ranks Connecticut as the nation’s leader in the speed of processing Medicaid applications and eligibility

How do I exit Minecraft without a break?